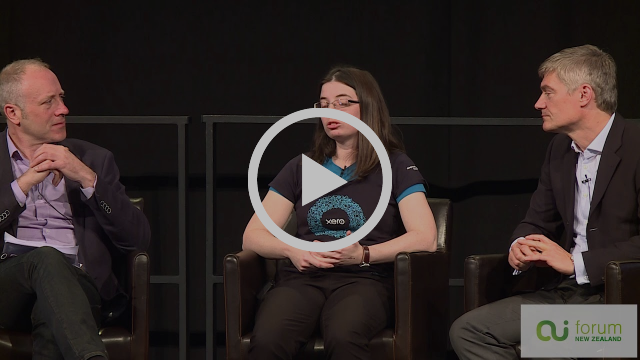 This month in my role with @AIForumNZ I had the pleasure of taking part in a panel discussion on AI at the Canterbury Tech Summit with @DrKatNZ and @ErichPrem. A wide ranging conversation and really pointing up the opportunities – and challenges – of AI uptake.

Slightly later than normal this month, here’s Memia’s September roundup of the new, novel and next. For regular updates follow us on Twitter, LinkedIn or Facebook.

And – as always – please get in touch with your thoughts on what you’d like to hear more of.

My new band: Me + AI
Believe it or not, my first career choice was to be a pop musician. (Admittedly not a lot of demand for melodic punk-folk cross between The Pogues and Violent Femmes – we never got much further past our first self-published EP… 🙂 ).

The main challenges with any band are dealing with all the varying musical tastes, skills and, let’s face it, egos – yours truly included. This may all be a thing of the past thanks to developments in AI.

New AI startups such as Amper and Jukedeck are training their systems with hours of music recordings and scores to be able to produce professional sounding music (ok…muzak) in seconds using only a few inputs: eg beats per minute, rhythm, mood, and style. Meanwhile if you’re getting writer’s block, you can use AI tools like DeepBeat to generate song lyrics…

Here are a few early examples of what’s possible with HI+AI music production – the AI system appears to complement the musician by being able to replicate the progression, flow and tone of a modern pop song: which the artist then embellishes. Is this a whole new soundscape to be explored? …or will all music from now on converge into a mediocre average of what a neural net calculates “optimal” music should sound like?

How to build a world class AI capability (with a Facebook-sized budget, natch…)
I’m permanently immersed in reading about AI these days… in particular this HBR article Inside Facebook’s AI Workshop – an interview with Joaquin Candela, head of FB’s Applied Machine Learning (AML) group – stood out for me in the clear and relatable way it explains how FB have built their internal AI team by focusing on the business impacts at all times.

Mixed Augmented Realities
The big players have been busy:

Liquid Election Time
September 23 is General Election day here in NZ – one of the closest fought campaigns ever known after new Labour leader Jacinda Ardern took over just 7 weeks ago. Watch this space, maybe there’ll be a new crowd in charge the day after…or maybe not.

While NZ benefits from an (imperfect) MMP proportional representation system which provides a high degree of stability and consensus to our politics (dull, even – but no Brexit or Trump votes going on here…) –  the whole parliamentary mechanism of how democracy is implemented seems increasingly archaic in modern times. Thus I was delighted to come across the concept of Liquid Democracy – “combining the advantages of Direct Democracy and Representative Democracy and creating a more democratic voting system that empowers voters to either vote on issues directly, or to delegate ones voting power to a trusted party.” It seems to make total sense now that new technologies exist to implement it at low cost  – NZ would be an ideal small country to test this system  – we should try it out.

Last minute CTO
Meanwhile in the last days of the General Election campaign, the National Party pivoted their position (partly in response to the recent NZ Tech Manifesto) with the announcement of the creation of a new national Chief Technology Officer role – not quite a “Ministry of the Future” but a step in the right direction, eh? Xero’s Rod Drury sums it up:

The Coming Kiwi Agribiz Armageddon and the Pollution Fallout
I’ve previously commented a number of times on the profound impacts of synthetic protein food investment on New Zealand’s heavily agricultural economy. Rosie Bosworth sums up much of the thinking in her article: Is New Zealand on the road to becoming the “Detroit of Agriculture?

In just the last few months:

I think we can all see how this plays out in ~10 years time…NZ primary sector prices collapse spectacularly in a matter of 1-3 years as industrial synthetic protein production takes off in-market overseas. This leaves disrupted Kiwi farmers desperately sucking the last drops of water out of the ground, pouring extra tonnes of nitrate on the land and antibiotics down animals throats in a fight for financial survival. Any concern for the environment or animal welfare will take second place. The whole house of cards topples as the banks call in debts on the hugely leveraged rural land underpinning most primary sector investment…NZ is left with a legacy of bankrupt farmers, depressed rural land prices and a polluted environment that will take decades to recover. How to avoid this, though? (Personally, I doubt that NZ can go “upmarket” to the high value niches – for one thing, virtually none of the upstream value chain assets are owned here…)

Perhaps the Netherlands, a small and crowded country, is currently number two global food producer in terms of value, shows us how it could be done. However the Dutch have the advantage of being right next to their market geographically.

Definitely one of the first matters on the desk of the new national CTO.

Currently reading… Life 3.0: Being Human In The Age of Artificial Intelligence by cosmologist Max Tegmark, co-founder of the Future Of Life Institute. The book opens with a bang, outlining a near future scenario where a crack team of AI engineers bring about AGI and take over the world (for the “good”) – …but what then? Very thought provoking and accessible read.

RIP Cassini
Earlier this month – after nearly 20 years traveling hundreds of millions of miles and studying Saturn from every angle – the Cassini probe ended its mission by crashing directly into the surface of the planet. This accessible video outlines 10 Incredible Things We Learned From The Cassini Mission.
Perhaps one of the most profound aspects about the whole mission is the immortalisation of the 18th century Italian astronomer Giovanni Domenico Cassini who originally discovered Saturn’s satellites and the division of its rings – pretty cool to have your name on the first satellite to visit the planet >200 years after looking through that telescope… what discoveries are we making today that mean individual people’s names will live on that long?